After a grueling hour and forty minutes on a broken down Greyhound bus that was probably built before I was born, we arrived at Travis Air Force Base in California. There we boarded a huge cargo plane. I don’t remember the model, but they told us the only plane larger was the B-52 Bombers.

The flight was long (about twenty-two hours) with two stops before reaching our destination, which was Bien Hoa Air Base in Vietnam. Our first stop was Anchorage, Alaska and then Yokota Air Base in Japan. It was night time and very dark when we landed in Bien Hoa. This was one of the first US bases built during the Vietnam War. The air base was one of the busiest airports in the world during the war. 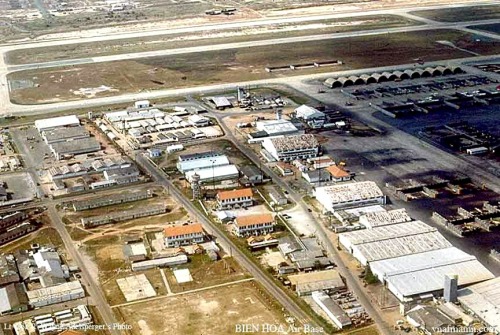 The door of the plane was opened, and immediately I was bombarded by the heat. The intense humidity made my uniform stick to me and was quite uncomfortable. There was a smell in the air which seemed to be a combination of garbage and urine, with just the hint of disinfectant.
We were now in a foreign land, very foreign indeed…