We came in ‘Hot’ with our Gas Masks and Flack Jackets on. 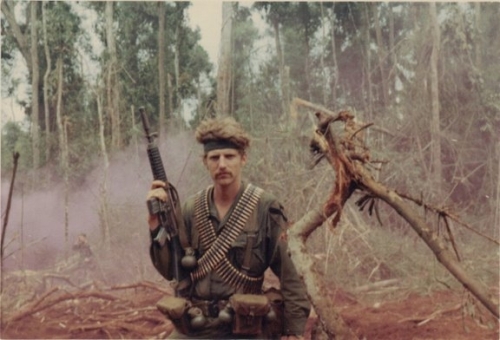 His name was Weaver (above) our point man and occasional ‘tunnel rat’.

Our Scout birds (White platoon) had spotted heavy enemy troop movement in an area next to the Cambodia border, and the ‘upper brass’ felt it was time for the Blues to check it out.

Because we would be grossly outnumbered by the unfriendlies, CS gas (tear gas) was pumped into the area just moments before we were inserted. The CS gas probably came from an artillery battery at a nearby US firebase. The tear gas apparently did the trick. The bad guys di di maued (left quickly) before we got there so we were met with no resistance. As soon as the air was clear enough we removed our gas masks and began to recon the area.

Our point man (Weaver) discovered an entrance to an underground tunnel. He pulled the pin on a hand grenade and tossed it into the opening. After the dust settled, he decided to enter the tunnel for a look around. After a few minutes Weaver came out and said there was a small dug-out area relatively close to the entrance that contained papers and other things. A couple of us (including myself) went back in with him to retrieve the items.

What we had found was important NVA documents and some NVA/Vietcong war medals. Our mission was complete with those findings, so we called for our Lift birds to pull us out before ‘Charlie’ came back.

I confiscated two of the NVA/Vietcong medals and mailed them to my girlfriend back in Iowa for safekeeping. She never did receive them…