Tried it for a Change 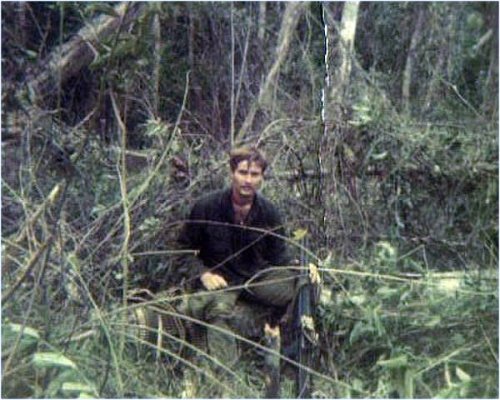 I traded my radio in for a M-60 on a few missions just to see what it was like carrying all that firepower.

As you can see in this picture I found out. It gave me quite a workout with those 100-round bandoleers draped over my shoulders. I think I was carrying extra ammo for our ‘Ace Gunner’ Mike Milton, who sometimes requested that of his fellow Blues.

On a typical recon mission, the Blues had two of their 12 men carry the M60 machine gun.

The M-60 7.62mm machine gun is a gas-operated, air-cooled, belt-fed, automatic machine gun that fires from the open-bolt position. It has a maximum rate of fire of 750 rounds per minute. Ammunition is fed into the weapon from a 100-round bandoleer containing a disintegrating metallic split-link belt. It can be fired from the shoulder, hip, or underarm position; from the bipod-steadied position; or from the tripod-mounted position. It has a removable barrel which could be easily changed to prevent overheating…