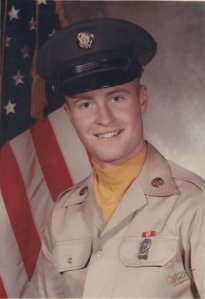 At the end of Basic Training, you were assigned a MOS (Military Occupational Specialty). My MOS was 11 Delta (Recon) and my training was to be at Fort Knox, KY. I don’t remember the exact dates, but I know I arrived there sometime before Christmas of 1969.

We trained in APC’s (Armored Personnel Carriers) and believe it or not, I didn’t even see one in Vietnam.

I recall a two week bivouac, we did in the Kentucky mountains in the middle of winter. We slept in tents and half of our training company came down with pneumonia, including myself. Couple days in the hospital and good as new. Now that’s good training for the hot steamy jungles of Vietnam.

Then there was the day my buddy, and I got mugged walking back to our barracks from the PX. Three guys attacked us from behind. I received a karate chop to the back of my neck while the other two started kicking my buddy while on the ground. Before they could get our money, they were chased off by a bunch of guys not far behind us.

For the most part, AIT wasn’t all that bad. In comparison to Basic it was a cakewalk. We got treated with a little more respect, after all we were now considered soldiers.

In late February, I graduated from AIT and as expected I received orders for Vietnam. The next two weeks I spent on leave back in Iowa visiting with family and friends. The training we receive in Basic and AIT was much needed to prepare us for what was to come. They did a good job of brainwashing us, because I never once considered not going, and better yet not returning…

One response to “Recon Training at Fort Knox”