Television Coverage of the Vietnam War

I entered high school in the middle 60’s when the war in Vietnam was escalating at a rapid pace. Newspapers and magazines were plastered with photos and stories about our involvement in Vietnam. The top stories on the nightly world news were always about the war. Newsmen were often in the middle of the action reporting the horrors of war as it happened.

I enlisted in the Navy shortly after graduating from high school and was on the 120-day delay program before I would become active. The Navy never occurred due to an untimely event in my life. I then became eligible for the draft and I knew Vietnam would be my fate…

In early December 1970, I had the privilege of meeting John Hlavacek a reporter/foreign correspondent for a midwest television station. I was no longer with the Charlie Troop Blues due to an injury on the greenline of Phuoc Vinh and was chosen to be our Troop mail clerk for the remainder of my tour.

John’s mission was to film and interview soldiers serving in Vietnam from the TV viewing area around Sioux City, IA and Omaha, NE. He was putting together a program to be viewed as a TV Special during the 1970 Christmas Holidays. The families of the soldiers were notified by the TV stations ahead of times they could watch their loved ones when the program aired. 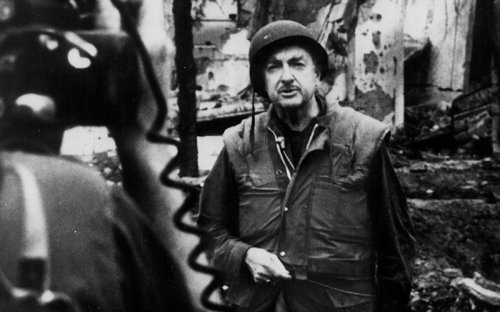 “I always want to emphasize, I felt honored — and I use the word measuredly — to cover American men and women in combat in Vietnam. Because, what everyone may think of the war — it may have been the wrong war and the wrong place at the wrong time for the wrong reasons — but the Americans who went there, went there for the right reason. They went there because they loved their country, and their county had asked them to go.”

Chaplain John McNamara of Boston makes the sign of the cross as he administers the last rites to photographer Dickey Chapelle in South Vietnam Nov. 4, 1965. Chapelle was covering a U.S. Marine unit on a combat operation near Chu Lai for the National Observer when she was seriously wounded, along with four Marines, by an exploding mine. She died in a helicopter en route to a hospital. She became the first female war correspondent to be killed in Vietnam, as well as the first American female reporter to be killed in action. Her body was repatriated with an honor guard consisting of six Marines and she was given full Marine burial.

There were more images of conflict and battles in Vietnam than any previous war. Many scholars consider Vietnam to be one of the most well documented wars in modern times. War reporters began to report on the bloody battles of the Vietnam War and the Washington politics surrounding it. The American people began losing faith in the war effort and the government. “Reports during the Vietnam War and images from the front line on television were crucial factors in turning public opinion against the war.