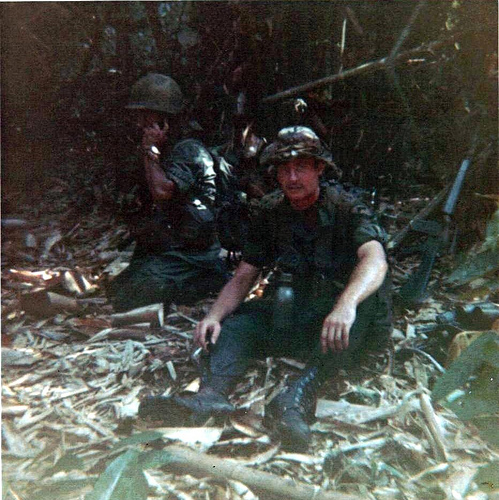 As you can see in this picture, De La Rosa did all the talking on the radio. I just carried it. Hey, what’s an extra thirty pounds on your back?

It was a typical Blues recon mission. Thirteen of us walking single file spaced about six feet apart. I was carrying a PRC-25 radio along with my M-16 rifle. The man in front of me was Sergeant First Class De La Rosa our Platoon Sargent.

Our routine stroll through the jungle was interrupted by rapid machine gun fire to our rear. I slammed my body to the ground and tried to make myself as invisible as possible, which was hard to do with the radio antenna waving around in the air. In a matter of seconds SFC De La Rosa was next to me talking on my radio communicating with our Pink Team circling above us.

At that point, we didn’t know if it was sniper fire, an ambush or something more serious. In any event, we were usually outnumbered, but we had lots of firepower flying around above us and ‘Charlie’ was aware of that.
After burning up a few clips of M-16 rounds toward an invisible target, I ceased fire along with everyone else.
Nothing more materialized from that incident, so we called our Lift birds to extract us.

Later that evening back in Phuoc Vinh we found out what really happened that day. Mike Milton our ‘Ace’ M-60 Machine Gunner staged a firefight. He began firing his machine gun into the jungle just out of boredom. It definitely worked!

I could tell by De La Rosa’s actions he truly loved being in the thick of things and also the adrenalin rush which occures during a firefight. His first tour in Vietnam began in 1965, so he was no stranger to combat…