Chow Time On The Dmz by Bob George

Early each morning, while our choppers were cranking I would walk down to the Phuoc Vinh flight line to a supply conex container with eleven or so other Blues. There we gathered what we needed for another recon mission.

I’d grab my radio, smoke and fragmentation grenades and plenty of M16 ammo. The conex held everything we needed except our M16 that we kept by our side night and day.

There were also cases of C-rations in the conex with a variety of twelve different meals of which to choose. It was always a treat if you got your hands on LRP rations, which were much tastier. I filled at least two water canteens for the day. You didn’t want to short yourself of water; the heat and humidity in the jungle were very unforgiving. 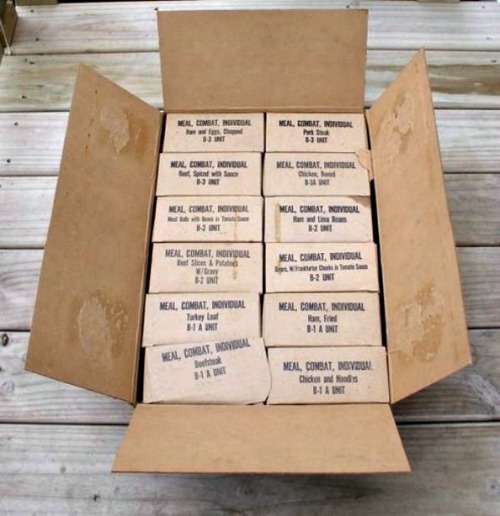 Twelve different menus are included.
Each menu contains:
One canned meat item
One canned fruit, bread or dessert item
One B unit
An accessory packet containing cigarettes, matches, chewing gum, toilet paper, coffee, cream, sugar, and salt and a spoon.
Four can openers are provided in each case of 12 meals. Although the meat item can be eaten cold, it is more palatable when heated.

We usually ate a C-ration meal in the bush and as Blues, we had the luxury of returning to Phuoc Vinh for our last meal of the day at the mess hall.

Mess hall menu:
For breakfast, you had to decide whether or not you wanted SOS, which stands for Shit On Shingle, French Toast or pancakes. There were eggs and that day’s meat selection. Most of the time, it was bacon, but sometimes we had ham or sausage.

Coffee and chocolate or regular milk were the drinks of choice.

It seemed like every other day you got roast beef, mashed potatoes and gravy and a vegetable. The days in between was either a step up from beef, steak, hamburger or pork chops. We never asked where they got the meat.

Both Thanksgiving and Christmas meals were different in that stuffing, ham and turkey were offered instead of our usual daily dose of roast beef.

Many evenings I’d grab a vegetable burger from the officers club if the mess hall were closed before we got back. They sold them out of the club’s rear window.

After word had got out about the bad guy working in the mess hall, I consumed more cheeseburgers…

Charlie in the Mess Hall

The following is an accurate account of the capture of a suspected VC/NVA working in the 1st Squadron, 9th Cavalry, 1st Air Cavalry Division mess hall in Phuoc Vinh, Vietnam. The year was 1970 while I was serving with the Charlie Troop Blues. I ate many meals at this mess hall and surely looked this guy square in the eyes, not knowing who’s side he was on.

New mess hall (right) built to replace the one that burned in 1969.
Photo courtesy of Jim Delp 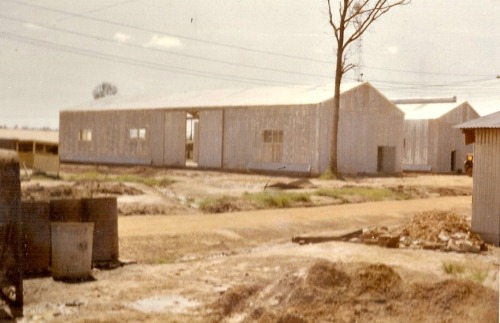 I remember that morning as being hot. The kind of hot no matter how climatized one was it promised to be a day of slow steps and a lot of liquid. I went to the flight line and watched the slicks take off with my platoon members and saying a prayer that they all came back safe and sound. I policed up the flight line of any trash and then I saw a Willie Pete grenade laying by the conex. “What was that doing there?” I thought. I reached down and picked it up. It sloshed. I stood there looking at it and waiting for myself to disappear in a flash of white burning light. I stood there and stood there looking at it. I gently placed it back on the pina prime. Walked backwards very slowly and took off for the OR (orderly room) to report it and have EOD come get it. That done, I went back to the conex. Yep, still there.

After what seemed an eternity a EOD Sp/4 showed up, asking me some questions, and walked over to the grenade. He picked it up and shook it, tossed it in the air and caught it with a behind the back catch. Me? I was shitting myself!

He just smiled at me and said something like, “Yep! She’s a hot one alright!” I didn’t want to know really what a “hot one” meant No, not at all and just wanted him to take that thing far away from me and the flight line as possible.

Once gone I opened the conex, after checking for trip wires, etc. (still spooked) and checked the ammo and the spare M-60’s we had hid.I looked for the spare Ma Deuces we also sto……borrowed…….and made sure it was well concealed. I thought about what a way to start a day. Little did I know.

I went to the hanger to check on a slick to see when she’d be ready to fly again. Filled out some paperwork and SSG Gonzalez asked me how my studying was coming along. I told him great, and I’d be ready for a test soon.

History here. I was a bonafide 11B40 killer assigned as a platoon sergeant to Lift Platoon and now had a PMOS of 67N40. That magic of that Army OJT thing converted me somewhere up there in the sky. I could pull a 25 hour PM, was a competent door-gunner, an expert shot, but didn’t understand the first thing about being a 67N40. If I was sent stateside with that MOS, I knew I would be a poor excuse for maintenance NCO. SSG Gonzalez lent me manuals to study and would kindly quiz me after I studied for a while.

By this time, it was nearing noon chow, and I stopped by the mess hall to see what was on the noon menu. That done I headed for the hooch to finish some paperwork so decided to skip lunch.

I went to my cubicle and did just that. I cranked the fan on high and stripped to my undershorts. After that, I checked the platoon members personal areas to make sure all was secured (yet) and being the bad guy checked for stashes of pot. I kept missing those small baggies all the time unless I could plainly see them and if I did I hid them better from the prying eyes of the senior NCO’s and officers.

I got into a bullshit session with PSG Bryant (White Mike). He told me all the latest gossip supposedly going on around the troop, to include the big MP dog catcher patrol coming up in the near future. He was right. It did happen, but that’s another chapter in Lift Platoon.

I redressed, and strapped on my side arm and headed for the hanger again. I had just walked past the side of the mess hall when “Old Papasan” came running towards me with his stick with the nail in it for picking up trash in the squadron area. He kept yelling, “Trung Si! Trung Si! VC! VC! VC!” I had never seen him move that fast nor that look on his face. I mean I’d lend him a cigarette or two throughout the day but I never considered him a great pal or ally!

He was pissed off about something and kept pointing to the back of the mess hall. There, hanging out the door, stood this gook that was smoking a cigarette and watching us. I recognized him immediately.

He had a white-wall haircut ever since I could remember. He worked on the service line and always had a look of disgust on his face each time he served a GI. I said something jokingly to him once about his haircut, and he just sneered at me. Every time he saw me he’d give me that sneer. One day I raised my hand into a finger pistol and pretended to shoot him. He saw me. He just sneered bigger and had a look of, “I dare you”, in his face. We soon disliked each other immensely. He reminded me of NVA regulars I had seen before only cleaner.

Anyway, back to the story. I unholstered my Colt 1911 and jacked a round into the chamber and followed Papasan to accused VC. Papasan kept repeating “VC! VC! Trung Si. Numba fuckin ten!”

I never took my eyes from that character in the door, and when he started to move to go back inside I yelled to him, “DUNG LAI! DUNG LAI!” (Stop! Stop!) as I raised and pointed my sidearm at him. “GIO TAY LEN!” (Hands up!) as I motioned with my pistol to put his hands up. He hesitated and looked back inside the mess hall. I yelled even louder, “LAM DI! NGAY BAY GIO! MEDO NGU!” (Do it! Now! Mother Fu$#@*!) That got him moving to comply and besides the end of the barrel of the .45 cal. was only now three feet away from his face. Then, “XOUNG! CODO’OC TREN GOI CUA BAN!” (Down! Get on your knees!)

He did, and Papasan nailed him, no pun intended, with the nail end of his litter stick. The whole time he had an intense look of hatred in his eyes and never took his eyes off mine. I mean I was dead if the eyes could’ve done it. I knew right then he was exactly what Papasan said he was. If he had been innocent, he would have started jabbering and pleading that he was not VC/NVA! I did a one hand pat down then.

I stepped behind him and forcibly put his hands behind his head all the while pressing the .45 cal. into his skull.

I guided him to the troop OR with Papasan guarding him with the stick. When I reached the OR Papasan opened the door, and I shoved him inside.

Top Chewning was behind his desk and was looking at me like, “What the hell are you doing now?”

Got a prisoner for you Top. Papasan says he’s a VC. Papasan was nodding his head up and down so fast that I thought he would break his neck. Top just said, “Sir.”

The Troop CO came out, and I explained to him what had transpired. He was a captain and a former SF officer on a previous tour. I forgot his name.

He asked “Chuckles” some basic questions and “Chuckles” gave him that same intense look of hatred and didn’t even open his mouth. The CO told Top to call the White Mice (South Vietnamese police).

He then asked Papasan why he turned him in. Papasan replied that after every noon meal that he would get leftovers that were being thrown out to eat and maybe take some home with him. Chuckles had chased Papasan away from the garbage that day and when Papasan snuck back after he had thought Chuckles was gone Chuckles jumped out of the door and hit Papasan. Papasan took off running, and that was when he saw me.

Luckily I listened to him.

The White Mice showed up. The CO told them what had happened, and they nodded and took Chuckles away.

Papasan and I were dismissed with a “Good Job.” I took Papasan to my hooch and while he waited outside I went in and came back out and gave him some packs of cigarettes.

I headed for the flight line one day to help a 25 hour PM when Top called me into the orderly room. He proceeded to give me an update on Chuckles.

Chuckles was a hard case, and it took almost a week and a half to break him.